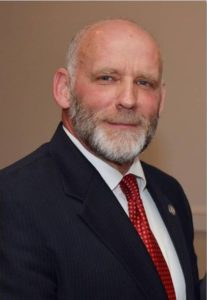 A native of Springfield, Tenn., Frank Pulley enlisted in the Marine Corps on 11 December 1976 and reported to the Marine Corps Recruit Depot (MCRD) San Diego, Calif., on 1 August 1977. Sergeant Major Pulley’s military career spanned over 30 years where he served in each of the respective elements of the Marine Air Ground Task Force (MAGTF) in a wide variety of duty assignments, exercises and operations in both CONUS and OCONUS.

He was meritoriously promoted to the Noncommissioned (NCO) and Staff Noncommissioned Officer (SNCO) ranks and received numerous personal and service awards throughout his career. He also served successful tours on independent and special duty, both as a recruiter and drill instructor. While on recruiting duty, he earned the coveted Centurion Award for enlisting over 100 applicants. He was also inducted into the Honorable Order of Saint Barbara for lasting contributions to the field artillery community.

Promoted to Sergeant Major in 1997, he would serve in the Corps’ most senior enlisted rank/billet for more than ten years. He was an honor graduate from the U.S. Army Sergeants Major Academy (USASMA), exceeding course standards and named to the Commandant’s Honor Roll. As a Sergeant Major, his assignments included: 3rd Battalion, 12th Marines, 3rd Marine Division (Jun 97-Jul 99); 3rd Transportation Support Battalion, 3rd Force Service Support Group (Jul 99-May 01); Marine Wing Support Group-17, 1st Marine Aircraft Wing (May 01-Mar 03); and the Marine Corps Recruit Depot, San Diego, Calif./Western Recruiting Region, where he served from April 2003 until February 2006. His last active duty post was as the Division Sergeant Major, 1st Marine Division where he served from 2 February 2006 until 19 October 2007. Sergeant Major Pulley was transferred to the retired list on 1 February 2008.

Since December 2008, Frank has served as the Marine Corps Association and Foundation’s (MCA&F) West Coast Area Representative. In this capacity, his goal is to help increase the overall awareness and membership of the Corps’ “preeminent professional organization”. Frank was also formerly the president of a Transition Services Organization (TSO) and worked tirelessly to assist military veterans and separating service members with their transition from active duty. For his noteworthy efforts, Frank was recognized as an Outstanding Community Service Honoree by the Veterans – Temecula Valley for exceptional service to his community.

In May 2011, Frank founded his own company, Military Veteran Solutions (MVS), Inc. MVS teams with vetted and highly reputable Military/Veteran-friendly companies to help qualified veterans land suitable employment – post-separation. In doing so, they reduce the overall unemployment, under-employment and homelessness rates of our nation’s veterans. One of MVS’ collaborations is with the U.S. Chamber of Commerce Foundation where Frank acts as a consultant for the Hiring Our Heroes program.

Frank was formerly an appointee on the Secretary of the Navy’s (SECNAV) Retiree Council and served as an officer on the Marines’ Memorial Association Board of Directors. He currently serves on the Boards of Director for the following non-profit organizations – Marine Executive Association (MEA), MCRD San Diego Museum Foundation and the West Coast Drill Instructors Association (WCDIA). Frank also serves as a Military Advisor for the Navy and Marine Association (NMA) and is a member of several military/veteran services organizations.

THIS WEBSITE IS NOT ENDORSED BY ANY BRANCH OF THE U.S. MILITARY OR THE DEPARTMENT OF DEFENSE

See What Others Are Saying

No one better on your side than Frank Pulley! I have known the Sergeant Major for many years and without question, this man will go to bat for you. His work ethic speaks for itself.